This author has yet to write their bio.
Meanwhile lets just say that we are proud Emily Tait contributed a whooping 21 entries.

In May 2019, the ILO released their latest report on women in business and management, showcasing that gender diversity improves business outcomes, while also positively affecting a company’s ability to attract talents. The report, carried our annually, surveys almost 13,000 enterprises from 70 countries in order to gain an overview of how various companies and […]

Fast-Track Program for Emerging Female Managers ”The happiest people discover their own nature and match their life to it” – Ray Dalio On Day One of the Fast-Track program, Professor Kriti Jain shared this statement from billionaire investor and philanthropist, Ray Dalio. By rooting the program firmly in identity, purpose and vision, participants were invited […]

Does the way you look matter when it comes to leadership? David Bolchover argues that similar looking CEOs reflects sameness in thinking. The proportion of women chief executives (CEOs) among the largest companies is very similar in the United Kingdom and the United States. Just five percent of CEOs at FTSE 100 companies, and 6.4 […]

On the 1st of March, our Diversity Council HR workshop was hosted at Gorrissen Federspiel, where the theme was ’Strengthening the Female Talent Pipeline: Attracting And Recruiting Diverse Talents’. The discussion centred on four keys areas that impact recruitment: Attracting Generation Z and Y, Social Media, Optics and Wording in Job Adverts and Headhunting.  We […]

Having taken on 4 new jobs in the last 5 years, Liezel Du Toit is no stranger to leadership challenges. Now Senior Director, Head of Revenue Excellence at Maersk, we spoke with Liezel about her participation in the Advanced Leadership Program for Women 2017, and why a successful leadership career requires both a strong drive, […]

By: Jais Valeur, CEO, Danish Crown At a meeting in England with Danish Crown’s British subsidiary earlier this year, I noticed something striking. A third of the executives in the room were women. “Extraordinary,” I thought, wondering how we could make that happen everywhere in Danish Crown. We Scandinavians regard ourselves as the world champions […]

One might wonder why the UK’s 20% gender pay gap among senior executives has not narrowed after two decades. While ‘external’ barriers, such as the lack of childcare support, social pressures and restrictive laws explain much of the difference, there is also a wide range of ‘internal’ barriers such as lack of self-confidence, passive expectations of pay and promotion, and guilt over time spent away from children to consider.

These deeply embedded motivational barriers, many of which have been passed down for generations, are at odds with the modern aspirations of women. The resulting internal tensions they create prevent women from realising their true leadership potential.

– tensions created between present and aspirational gender expectations are not easily recognised; and

– that there is a wide diversity of those aspirational models.

The GTG is not correlated with economic development, but historically and culturally rooted. The early division of gender roles dates back to the agricultural revolution and evolved into enlightenment concepts of citizenship based around a male centred household. These norms were only seriously challenged in the 20th century. ‘How unpleasant it is to be locked out’ reflected writer Virginia Woolf on male-dominated institutions, before adding that ‘it is worse perhaps to be locked in.’

The failure to recognise the tensions arising from these incongruous traditional and future expectations have always carried consequences—whether it’s the disappearance of women in music after composition became more ‘mathematical’ (or masculine) in the 18th century, or more recently the loss of women in the video games industry. But how does this happen?

Consider, for example, the female response to work-place stress such as having a difficult boss. Most men would soldier on or seek another job. But many women seriously consider leaving work altogether to focus on home life. This is not to suggest that men (especially those from poorer or minority backgrounds) do not struggle with inherited cultural norms of their own, particularly to be the family breadwinner. Yet when it comes to career, they tend to retain a ‘linear’ perception of success (e.g. to be manager by age 30, director at 40 etc.) while women tend to be linear in their view of domestic success (i.e. first child by 30, family complete by 36 etc.). The question is whether this attitude represents an authentic choice or a cultural holdover?

Women’s career challenge therefore lies in Kafka’s reference to ‘living in the present’ which requires women come to terms with the past while simultaneously preparing to fight for the future. Women may have inherited a normative model from their parents and grandparents. But in challenging these expectations they can establish a multiplicity of future models, including those that place individuality above gender. Moreover, typical internal barriers may change over time as women adopt less conventional family lifestyles or perhaps choose not to have children. It may even be that rebellious daughters reject their mothers’ quest for workplace equality, and decide to work part time or be stay-at-home mothers.

The path to equality may not run smooth. But determining authentic motivations (in men as well as women) through the gender tension gap model will help women better define what they are struggling against.

We often hear about the war for talent, but are companies looking in the wrong places for the best recruits?

The report measures 169 countries across 4 thematic divisions in order to rank them in terms of gender parity, which is measured on a scale of 0 (disparity) to 1 (parity). 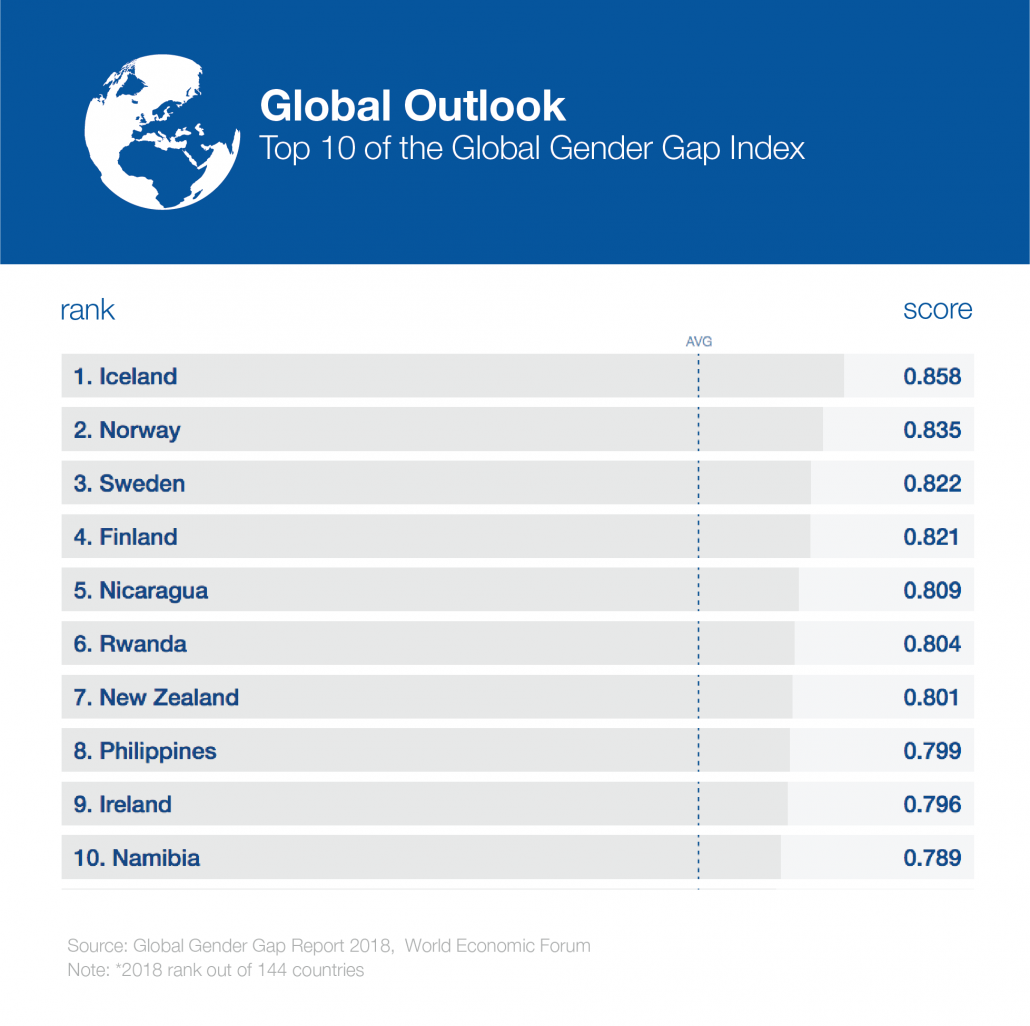 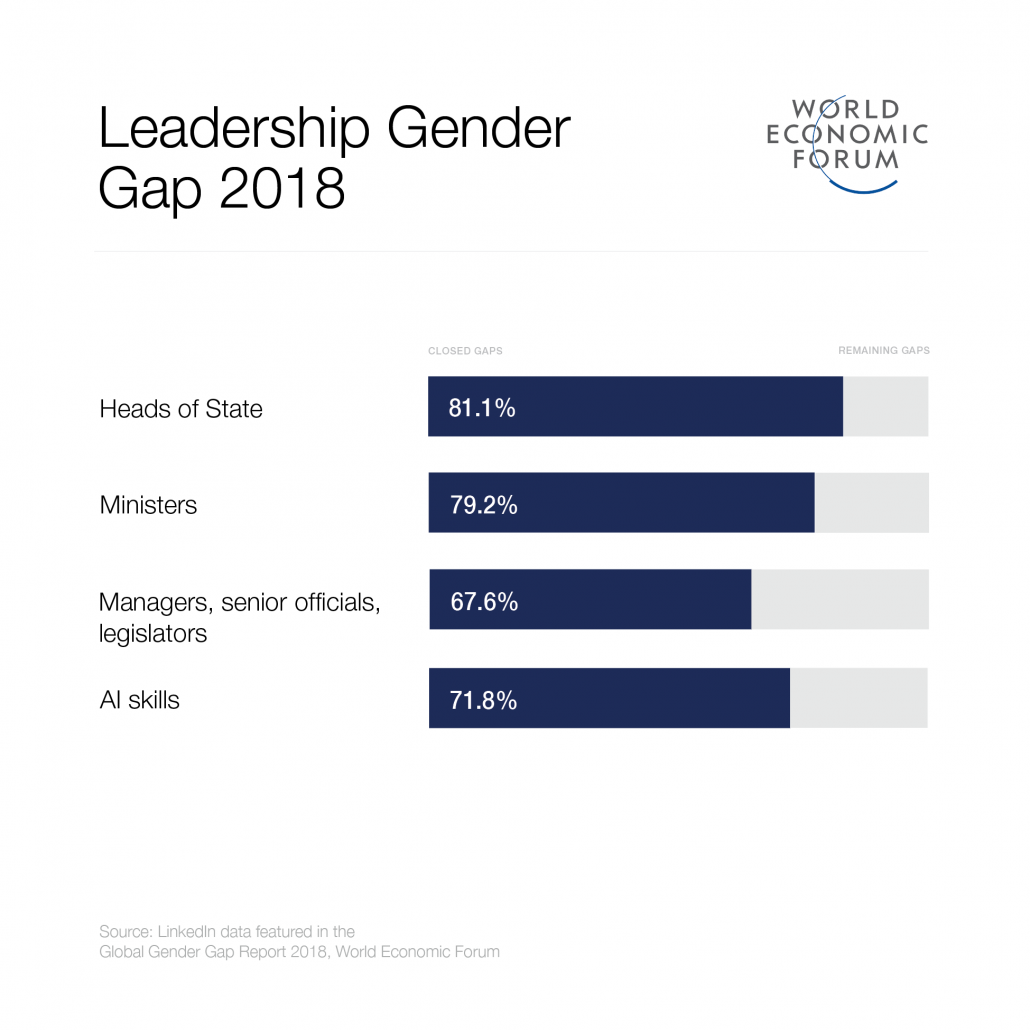 In summary, the gender gap has reduced slightly in 2018, but the declining representation of women in politics and stagnation in the proportion of women in the workplace mean that any improvements are minimal. ‘Economic Opportunity’ was the only area that narrowed the gender gap, largely due to the reduction of the pay gap (51%) and increase in the number of women in leadership roles (34%).

The data suggests that women are participating less in the workforce, perhaps due to automation disproportionately replacing jobs traditionally carried out by women, while traditionally male STEM jobs are increasing. Another possible option is that the lack of infrastructure for childcare and eldercare prevents women re-entering the workforce.

This year, the WEF drew attention to the glaring disparity in the field of AI, where women represent only 22% of the workforce, a gap 3 x larger than other industry talent pipelines. Proactive measures are vital in these male-dominated industries that will dominate the future of work. Furthermore, slimming the gender gap will also have positive economic ramifications for businesses in the long term, given that diverse companies perform better. 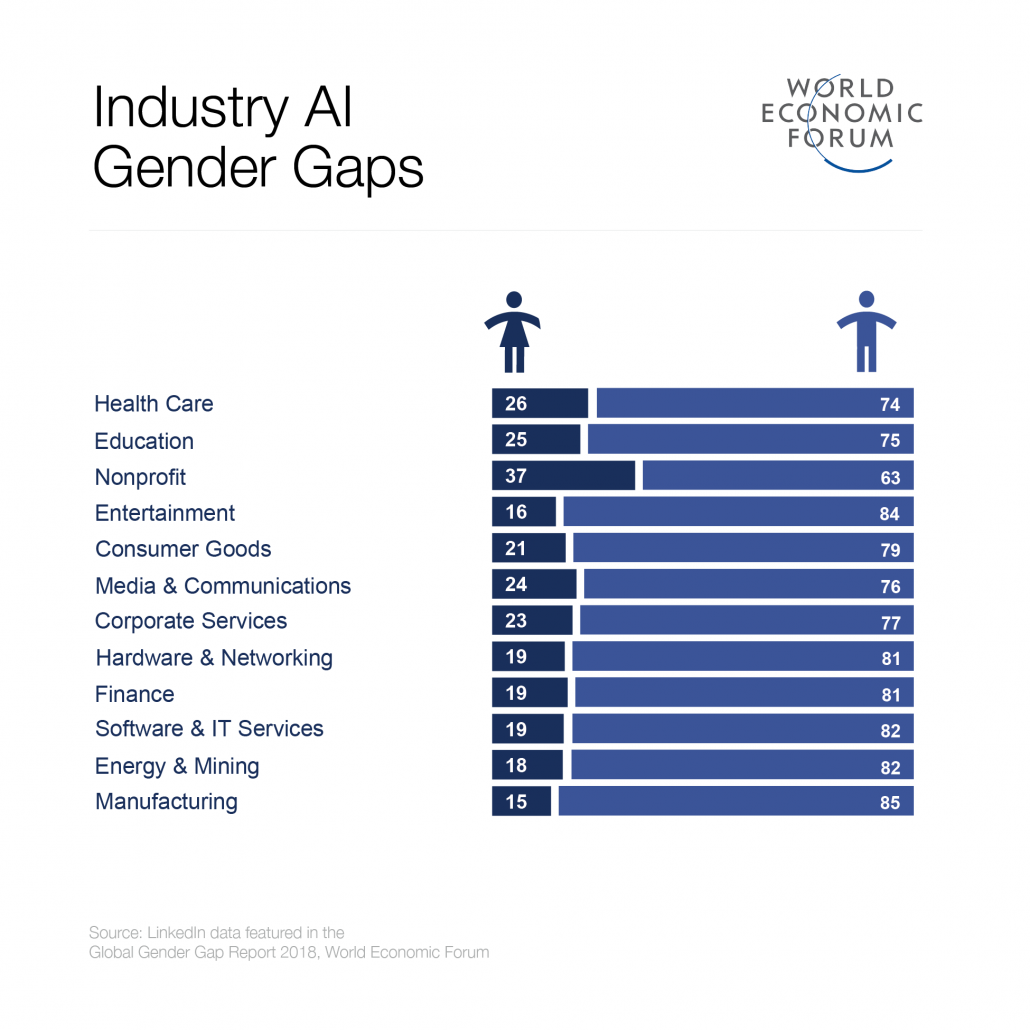 “The economies that will succeed in the Fourth Industrial Revolution will be those that are best able to harness all their available talent. Proactive measures that support gender parity and social inclusion and address historical imbalances are therefore essential for the health of the global economy as well as for the good of society as a whole”